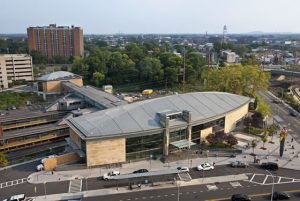 formerly known as Trenton Rail Station, is the main passenger train station in Trenton, New Jersey. It is the westernmost stop in New Jersey on the Northeast Corridor. It is the terminus for New Jersey Transit trains to and from New York City and SEPTA Trenton Line Regional Rail trains to and from Philadelphia, Pennsylvania, and an intermediate station for Amtrak trains traveling between the two cities along the Northeast Corridor.

The River Line light rail, which offers service to Camden along the Delaware River, is across the street.

Trenton is the only city to serve three major railway systems in the state of New Jersey (Amtrak, NJ Transit, and SEPTA). Trenton is the third-busiest train station in New Jersey and the 24th-busiest stop in the Amtrak network.

Rail service in Trenton dates back to the days of the Camden and Amboy Railroad, which built a station on East Street in 1837, until it was moved to the current site in 1863. 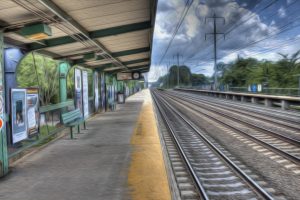 is a New Jersey Transit (NJT) and Amtrak rail station on the Northeast Corridor located in Princeton Junction, a census-designated place within West Windsor Township in New Jersey, USA. On Amtrak and NJT tickets its abbreviation is PJC.

As of 2011, Princeton Junction was the 5th busiest station in the NJT rail system, with an average of 6,826 weekday boarding rider ship decreased slightly in 2012 to an average of 6,816 passengers per weekday. In addition to the Northeast Corridor Line, NJT operates a 2.8-mile (4.51-km) spur line, the Princeton Branch to Princeton Station located at the Princeton University campus in Princeton. The shuttle is colloquially known as the “Dinky”  and has also been known as the “PJ&B” (for “Princeton Junction and Back”). Two train cars, or sometimes just one, are used. A single switch connects the branch to the Northeast Corridor tracks north of the station. 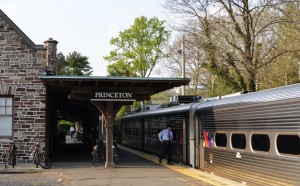 Princeton Junction’s origins can be traced back to the United New Jersey Railroad and Canal Company the predecessor of the Pennsylvania Railroad.

Albert Einstein, who lived at 112 Mercer Street in Princeton, used to enjoy sitting at the station and watching the trains go by.[14] More than once he employed trains to explain the practical effects of his General Theory of Relativity.